From Cash to Pink Diamonds

It’s been another volatile week in financial markets, with cryptocurrency prices crashing, and equity markets starting to fall as well.

The biggest news of the week was the much higher than expected US inflation result (over 4% year on year), which showed prices rising at their fastest level in over a decade.

The chart below, which comes from ING, highlights inflationary trends over the past 8 years, with the speed of price gains accelerating dramatically in the past few months. 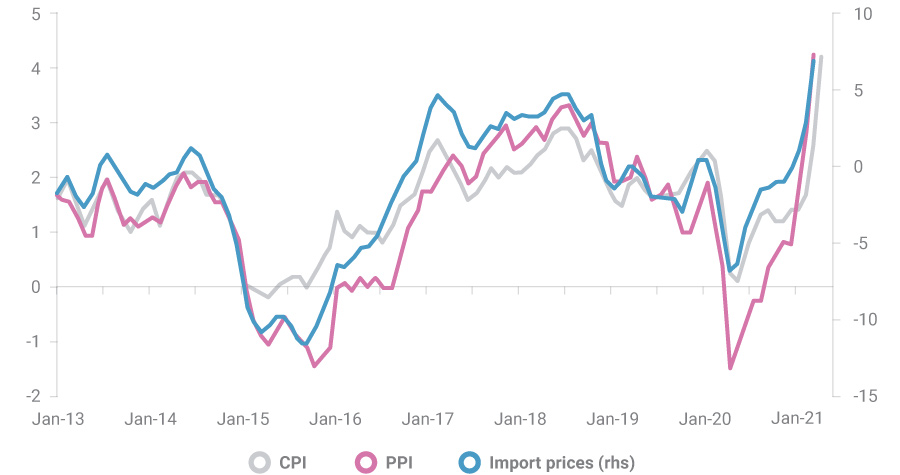 As regular readers of our market reports will know, we see higher inflation as one of the key catalysts that will send pink diamond prices soaring in the decade ahead.

Seeing higher rates of inflation, and record low interest rates, it is only natural that investors will respond, and will increasingly look to rotate money out of cash, and into hard assets that offer the kind of capital gains that not only match, but indeed exceed inflation rates.

We explore this in detail below.

From cash to diamonds

At present, investors in developed markets including Australia are sitting on large stockpiles of cash, all of which is going backwards in real terms, i.e. once inflation is factored in.

As a way of visualising just how much cash we are talking about, consider the table below, which comes from the Association of Superannuation Funds Australia (ASFA). It shows how much money is sitting in a variety of asset classes, both in AUD billions of dollars, as well as a percentage of total investable assets. 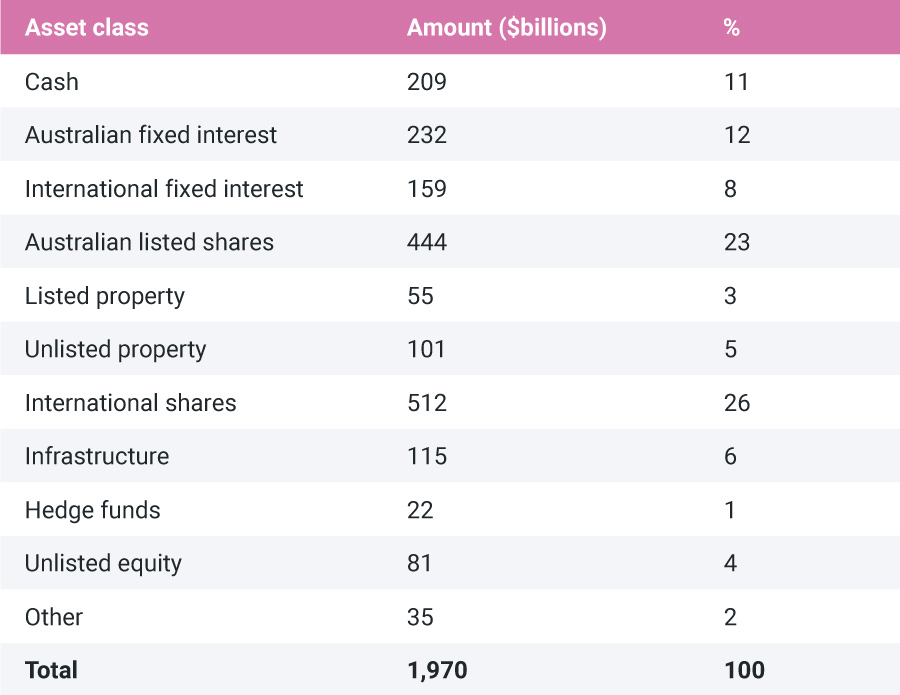 As you can see, over AUD $200 billion is in cash, with another $391 billion in fixed interest securities, which is mostly government bonds.

Note that the above does not include SMSF money, as this is not covered by APRA, though estimates suggest roughly 20% of SMSF money (about AUD $150bn) is also in cash and term deposits.

So, in Australia alone, investors are sitting on somewhere between AUD $350bn to AUD $650bn in cash and fixed income securities inside superannuation alone, with the vast majority of this earning less than zero once inflation is factored in.

This problem is not going to go away anytime soon, with market pricing telling us that at present, cash and government bonds will have negative real yields for the entirety of this decade.

Indeed, rather than worrying about raising interest rates, most central banks are more focused on raising inflation, so that the real returns investors earn on cash gets even worse.

Based on our estimates, it would not shock to see cash, as an asset class, lose anywhere between 30 to 50% of its purchasing power in the next decade, and that is as measured against official consumer price inflation data.

If measured against the need to have’s in life, like health care and utilities, where price increases often run at double the official inflation rates, then cash could lose closer to 75% of its purchasing power quite easily.

For those who think this can’t happen, look at the chart below, which shows inflation rates (black), interest rates (blue), and real interest rates (pink) over the last 50 years in the USA. 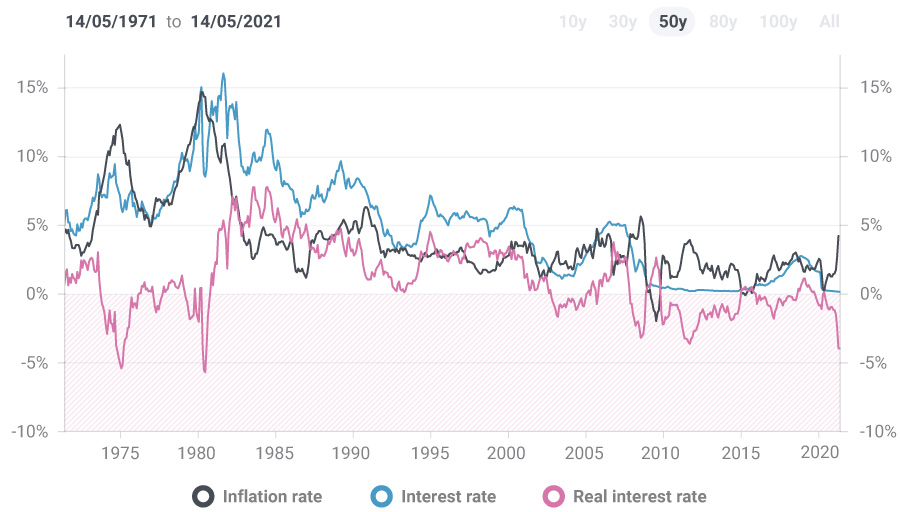 Note how in the 70s real rates were basically negative for a decade, dropping as low as -5.70% at one point. That is the world we are headed toward.

This inflation threat is going to have profound implications for all asset classes, and how investors should position their portfolios.

Cash and fixed income are the obvious losers. Equities might fare somewhat better, though history tells us they also tend to suffer during periods of high inflation.

Only commodities will preserve and grow wealth. And of all the commodities that are set to prosper, none is rarer, or more highly sought after by investors worldwide than pink diamonds.

On May 23rd, Christies Magnificent Jewels Auction will take place in Hong Kong. The largest purple-pink flawless diamond, The Sakura, will headline the auction, with estimates suggesting it could fetch close to $40m. This diamond, which takes its name from the Japanese word for cherry blossom, can be seen in the photo above. Weighing in at almost 16 carats, The Sakura, which is a fancy vivid pink (note: less than 5% of pink diamonds are classified as fancy vivids) is likely to break prior records for a pink diamond sale, with The Spirit of The Rose fetching almost $27 million last year.

Auctions like this, and the news flow that they generate help grow awareness for pink diamonds as a whole, with astute investors aware that this asset class can be accessed with investments starting at AUD$25,000 or more.

Those positioning their capital in this space are likely to be well rewarded, given the bullish outlook for the asset class, which is set to continue outperforming traditional investments, as it has for the majority of the last 15 years.