Where to now for Australia?

It’s been just over two months since the Scott Morrison led Liberal party, in conjunction with their Coalition partners were returned to office.

Since the election, we’ve seen much change in financial markets, the most notable of which has been the two interest rate cuts by the Reserve Bank of Australia (RBA), who have now brought the cash rate down to just 1%, a new all-time low.

Equity markets have had a minor rally, up 3% since the election result, whilst the dollar has been fairly flat, still trading near USD $0.70.

But the biggest news has been in the property market, where a number of developments have helped stabilise prices, after over a year of price falls which saw Sydney and Melbourne prices lose over 10% of their value.

These developments have included

On top of the cuts to interest rates, and the removal of uncertainty regarding changes to negative gearing and capital gains tax, these developments have helped stabilise property prices. It has also seen a notable uptick in auction clearance rates across the country, which you can see in the chart below.

The stabilisation in prices and uptick in auction rates has led some commentators to forecast a return to boom times. We are not so sure at all, as we see a number of warning signs highlighting how uncertain the economy is, and how stretched households are.

END_OF_DOCUMENT_TOKEN_TO_BE_REPLACED

ADP in the News as 2019 Argyle Tender Released

The stunning collection was released on site at the Argyle Diamond Mine in the East Kimberly Region of Western Australia, and will be showcased in Perth, Hong Kong and New York in the coming months.

Commenting on the incredible diamonds that make up the 2019 tender, Rio Tinto Copper and Diamonds Chief Executive, Arnaud Soirat, made note that; “These diamonds, each a natural treasure, are a testament to the enormous range and depth of offering from the Argyle ore body, nearly four decades from when production commenced.”

Even more importantly for investors, Soirat’s comments about this year’s Tender highlighted the shrinking supply and growing demand dynamics at play with regards to rare pink diamonds.

The Chief Executive confirmed that; “in late 2020 we’ll be stopping operations,” and that “Rio Tinto’s Argyle mine is the first and only ongoing source of rare pink diamonds in history. With the lifecycle of this extraordinary mine approaching its end, we have seen, and continue to see, unstoppable demand for these truly limited-edition diamonds and strong value appreciation.”

END_OF_DOCUMENT_TOKEN_TO_BE_REPLACED

As sun sets on Argyle mine, prices for its last pink and purple diamonds to soar

Coloured Argyle diamonds are famed the world over for their stunning purple, pink and red hues that mirror the cotton-candy East Kimberley skies surrounding the mine at dusk.

With the Argyle diamond mine ore body depleting and closure likely to occur by the end of 2020, 90 per cent of the world’s coloured diamond supply will cease and the industry is expecting their value to explode as a result. 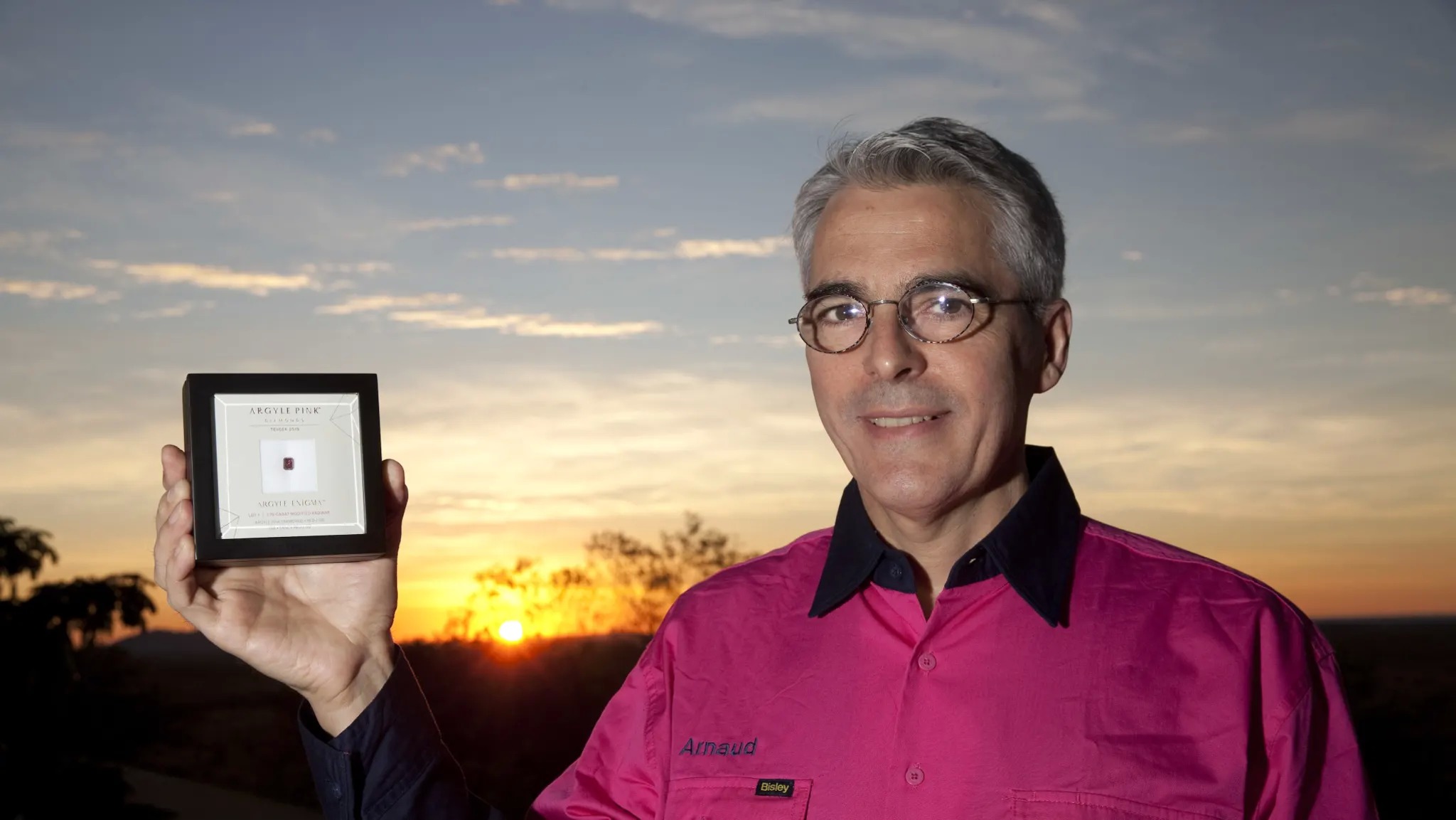 Mine owner Rio Tinto on Friday unveiled its 2019 Argyle diamond tender collection, potentially one of the last tenders to ever be held.
The 64 diamond, 56.28 carat collection includes the most spectacular finds at the mine for the year and will be showcased in Perth, Hong Kong and New York before being auctioned by October.

END_OF_DOCUMENT_TOKEN_TO_BE_REPLACED

The ADP Annual Report Is Here

This weeks “In the Loupe” is a little different to most. Rather than providing you with an overview of the latest developments in financial markets, or diamond specific news from the last 7 days, we’re instead sharing our just completed annual financial market, economic and rare coloured diamond update.

This detailed report looks at market and economic developments over the past year, both globally, and in Australia, where we look at property, the share market and of course the Australian dollar.

The update also includes some fascinating insights into the history of the Argyle Mine, and the outlook for supply in the coming years.

We also look at the short and long-term performance of the diamond market, and touch on the other aspects driving rare coloured diamond demand, including stability, diversification and discretion.

We hope you enjoy it, and look forward to any feedback you might have.

The new financial year is a great time for investors to take stock of their investment portfolios and look at which asset classes they want exposure to, in order to best protect and grow their wealth in the years ahead.

This year, there is an even greater sense of urgency when it comes to investments, due to a handful of key factors, including:

On top of this, it’s also been a really volatile year in the share market.

Overall performance was OK, but at one point the ASX was down over 10%, trading below 5,500 points in late December 2018, as markets around the world went through one of their worst periods since the GFC.

END_OF_DOCUMENT_TOKEN_TO_BE_REPLACED

As a follow on from our last two articles in which we compared diamonds with gold and with superannuation funds, this week’s “In the Loupe” is going to look at rare coloured diamonds vs. Australian property.

The article starts by comparing the long-term returns of diamonds to the returns on Australian property, as well as the recent decline in house prices.

We also look at other characteristics of both investments that are important for investors to consider, with a particular focus on diversification.

Whilst residential property prices have increased in value for most of the last twenty-five years, the returns across the nation as a whole have been more subdued over the last decade or so, with prices increasing by just under 5%.

Diamonds, as you can see in the chart below, have risen far more noticeably over this time period.

END_OF_DOCUMENT_TOKEN_TO_BE_REPLACED

Diamonds and Superannuation – What you need to know!

Following on from last week’s article where we compared diamonds with gold, this week’s “In the Loupe” is going to look at superannuation.

This is another very popular topic amongst the more than 10,000 investors who receive our “In the Loupe” newsletters, which is no surprise given superannuation is for many Australians the largest and fastest growing financial asset they have.

We are going to be looking at this from two angles, firstly comparing the long-term returns of diamonds to the returns on superannuation funds, as well as other characteristics that are important for investors.

After that we are going to look at how your superannuation can be used to invest in rare coloured diamonds.

END_OF_DOCUMENT_TOKEN_TO_BE_REPLACED

Diamonds or Gold – There’s only one best friend!

At Australian Diamond Portfolio, we get asked a lot of questions about rare coloured diamonds, and the key drivers of the market. For this reason, our regular ‘In the Loupe’ market updates typically focus on the supply and demand factors impacting diamonds, and why we think prices will move higher in the coming years.

This week we wanted to write an article specifically comparing rare coloured diamonds with gold, as this is a question we are often asked by our clients.

Over the next few weeks we will follow up with other articles comparing rare coloured diamonds with housing, and also look at diamonds in the context of superannuation investments, another popular topic amongst our client base.

END_OF_DOCUMENT_TOKEN_TO_BE_REPLACED

The case for investing in rare coloured diamonds gets stronger by the week, with a much-anticipated interest rate cut delivered by the Reserve Bank of Australia (RBA) yesterday.

Markets were expecting the cut, so it didn’t come as a shock, and indeed the Australian dollar actually rose after the decision was announced, though we expect it’s just a matter of time before more currency weakness comes into play.

The RBA decision, which brings the cash rate to a new all-time record low of just 1.25%, likely won’t be the end of the stimulus measures we see from the RBA in the coming year.

END_OF_DOCUMENT_TOKEN_TO_BE_REPLACED

Why its not too late to Invest in Pink Diamonds

In this week’s update, we wanted to share some insights from the overwhelmingly positive feedback we received at last week’s Australian Shareholders’ Association (ASA) National Conference, as well as key questions we were asked at our recent Diamond Master Class held in Sydney.

Combined, they reinforce why the outlook for pink diamond prices is so positive for the years ahead.

Starting with the ASA conference, aptly titled; “Investing in the Age of Uncertainty,” it was a real pleasure to speak to several hundred knowledgable and passionate investors about the opportunities pink diamond investments offer.

There were a handful of key themes we picked up on in our conversations with the investors who attended, and they all bode well for the future direction of pink diamond prices.

The fact that you could invest in pink diamonds was news to a lot of the attendees, who didn’t realise they could diversify their portfolios with this asset class. Given SMSF’s as a whole have over AUD $700bn of funds to invest, we think there is still plenty of diamond buying demand to come from this section of the market.

2) Hardly anyone knew the Argyle Mine was set to close

The fact that the Argyle mine is set to close in 2021 was a real eye-opener for many of the investors we spoke too. These people are savvy enough to have accumulated large portfolios over their working lives, and they understand what a massive reduction in supply can do to the price of an asset class that is seeing strong demand.