While many have cheered on this performance after seeing weeks of stock market falls and a seemingly unstoppable increase in the price of things like oil, it’s far too early to have any confidence that it will last.

Fortunately, there are some assets you can rely on to offer stability, as well as market leading growth.

Pink diamonds are one such asset, with prices continuing to rise at a rapid rate.

See below for the latest update details.

Last year, Australian Diamond Portfolio were proud to launch our very own Pink Diamond Index (ADPPDI), which tracks the price trajectory of pink diamonds as an asset class.

Built using price data from the many thousands of pink diamonds we track here at Australian Diamond Portfolio, the index showed explosive price growth in the 2020/21 financial year, with the asset class as a whole up by approximately 30%.

We are pleased to announce that the ADPPDI has now been updated to the end of last year, with pink diamond prices continuing to strengthen in the final six months of 2022. In total, they rose by 11% on average, which equates to an annual performance of more than 20%.

The performance figures can be seen in the table below, which breaks down the price growth in the ADPPDI not only across the major colour categories of pink diamonds (fancy, intense, and vivid), but also by size as well. 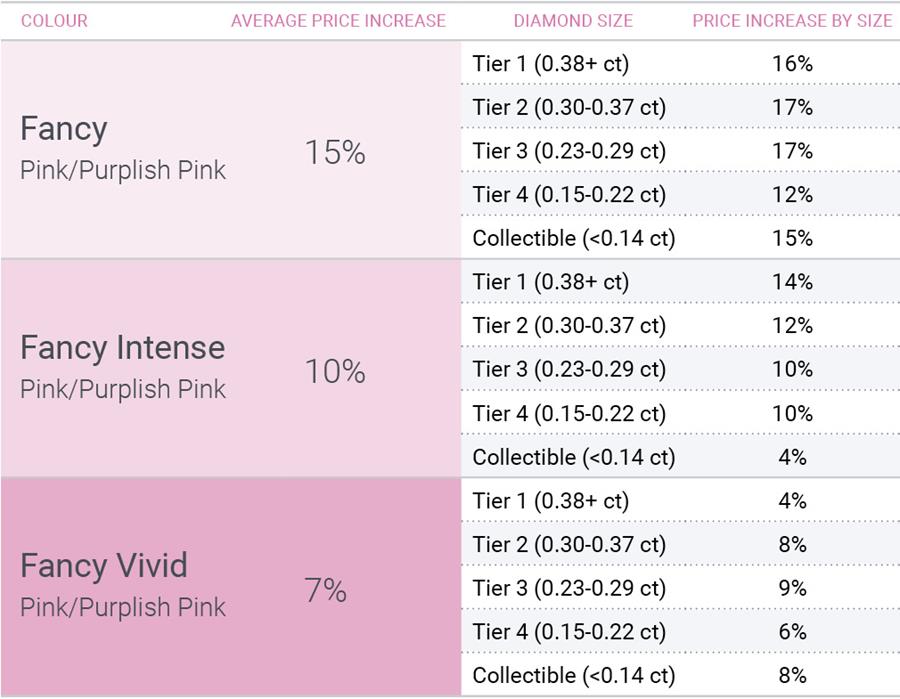 Of note, while vivid pinks are the most rare of all pink diamonds, and command the highest price, the ‘performance gap’ between these stones and fancy and intense pink diamonds began to close in the final six months of 2022.

In the six months to end-December, demand began to turn toward the lighter more affordable pinks, with prices responding to this, especially as availability on the market continues to decrease. This in large part explains the outperformance of fancy pink and fancy intense pink diamonds in the latter part of last year.

The second trend that stood out is the continued outperformance of larger diamonds vs the smaller diamonds (with vivid the exception).

Across the three main categories that the ADPPDI tracks, the average performance of Tier 1 and Tier 2 stones was 12% in the six months ending December 2022, vs. Tier 4 and Collectible stones, which saw average price growth of closer to 9%.

All up we are more than satisfied with the results shown by the ADPPDI, with pink diamonds continuing to offer astute investors a number of benefits:

Those are valuable attributes at all times. Today, they are more valuable than ever.

By late April or early May, we hope to bring you an updated ADPPDI which includes data to the end of March this year.

Based on the demand we’ve seen in 2022 so far, and engagement with our global contacts, the preliminary data suggests prices have continued to increase noticeably.

This of course is no surprise given the broader economic and market backdrop at play today, and how constrained the supply of pink diamonds remains.

The tragic situation unfolding in the Ukraine has many investors reassessing where they are willing to invest their money, as they are not only looking to grow their wealth, but also wanting to make sure it’s done in a way that doesn’t cause any ethical concerns.

This trend has implications for the broader diamond market (if not pink diamonds directly), as some 30% of the world’s rough diamond supply comes from Russia.

These diamonds, which are mostly found in Siberia, are mined by an organisation called Alrosa, which is controlled by the Russian state.

From our perspective, these factors only reinforce our belief that we are on the right track when it comes to focusing on pink diamonds sourced from the Argyle Mine.