In just over six weeks, we’ll hit the half way point for the calendar year 2022.

So far, it’s been an incredibly disappointing one for investors in traditional assets, with equity markets down, property prices starting to weaken, and traditional safe havens like bonds having their worst year on record, having fallen by approximately 10%.

Cash also remains ‘dead money’ given how low interest rates are, and the fact that inflation is at multi-decade highs, while even new asset classes like cryptocurrencies are in free fall (more on this below).

While the team at Australian Diamond Portfolio never like to see anyone lose money on any particular investment, we can’t help but be proud that we’ve helped so many Australians not just protect but indeed grow their wealth through this difficult period, with hard assets like pink diamonds really coming to the fore this year.

We expect this will remain the case for some time to come, as we discuss below.

One could argue that in the last decade, no asset class has captured more attention, or generated more interest than cryptocurrencies, most notably Bitcoin.

Marketed as a form of ‘digital gold’, cryptocurrencies have repeatedly soared then crashed, with a very small cohort of speculators in this market making huge amounts of money, which of course encourages others to follow suit.

As we’ve discussed in these updates previously, while we are not anti-cryptocurrencies per se (we aren’t anti any asset for that matter), we have always seen them as highly volatile speculations, rather than bedrock safe haven assets that investors can rely on over the long-run.

Ultimately, our scepticism about these assets, and the industry that has been built around them comes down to a simple question: what is the real use case for them, how valuable is that use case, and how sustainable are the returns?

We’ve never gained comfort that any particular cryptocurrency has a hugely valuable use case (which is not to say that they are all worthless), while the performance returns touted by many cryptocurrency bulls were never going to be sustained in our view, as no asset can realistically be expected to grow at 200% per annum for ever.

In the last few months, our scepticism toward this sector appears to have been vindicated, with Bitcoin, and the majority of crypto assets plunging in value. Indeed, since November of 2021, Bitcoin has fallen by almost 60%, from an all-time high close to USD $68,000 per coin, to less than USD $30,000 today.

As per the chart below, it’s crashed by just over 20% in the last five days alone. 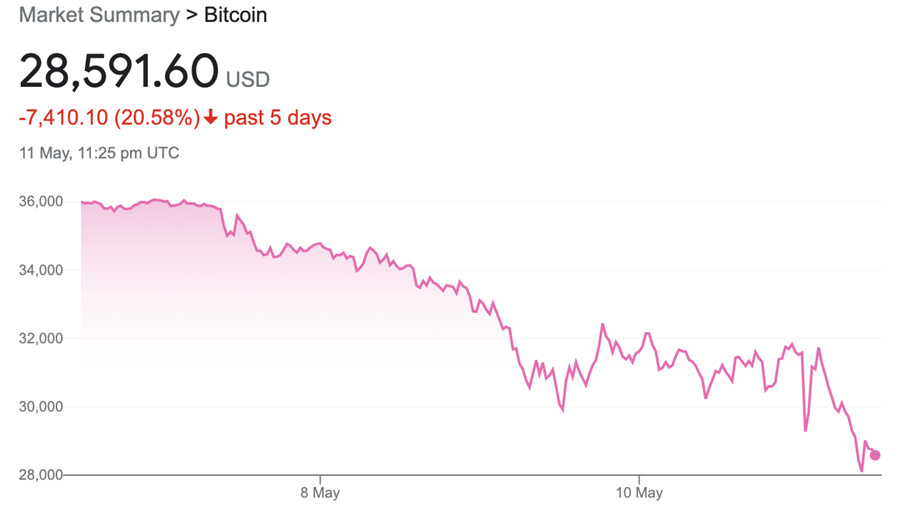 It’s even worse for companies operating in the cryptocurrency space, with shares in cryptocurrency exchange Coinbase now down by more than 80% from their all-time highs.

Note that the recent crash in cryptocurrency prices has occurred despite the “financialization” of Bitcoin, with ETFs and other investment products designed to track the Bitcoin price now widely available in the markets.

Those products were meant to push prices even higher. Instead, they look like they’ve marked the top of the market.

It’s also worth noting that this crash in cryptocurrency prices has occurred despite;

This is particularly relevant given Bitcoin and other cryptocurrencies are often sold as ‘safe haven’ assets which help diversify a portfolio.

If they are more volatile than equities, crash when equity prices are falling, and fall while inflation is surging, are they really a safe haven? We’d argue that they are not – or at least have not proved themselves to be at this stage.

Given this reality, it’s more important than ever that investors do their due diligence before committing capital to this asset class.

It is also why, if investors are looking for genuine safe havens, they should look at hard assets that are genuinely scarce, and that have a history of delivering outperformance, inflation protection, and portfolio stability when it’s needed most!

That’s where pink diamonds come in.

While most investors obsess over the daily price changes they observe in their portfolio, the next few years will be dominated by a number of bigger picture issues, which we always try to tie our educational updates back too.

Against this backdrop, the case for pink diamonds remains as strong as ever, especially when one considers that:

If adding a pink diamond to your investment portfolio is something you’d like to explore, the team at Australian Diamond Portfolio would be more than happy to assist.