Things continue to improve in the battle against COVID-19, with Australia slowly reopening. This is unquestionably good news, even if the path forward in terms of managing the ongoing health risks remains unclear.

Investors will also have many challenges to deal with in the coming years, one of which is likely to be higher inflation. Over the last two decades, official inflation rates have trended down, with many investors now convinced we won’t ever see it return, and that it’s no longer a risk to manage in their own portfolio.

Perhaps more than anything else, the chart below highlights why we think higher inflation is on the way, and why it is now a bigger threat than at any time in the last decade.

The chart shows the balance sheet of the United States Federal Reserve (The Fed), which recently topped USD $7 trillion, and how it has grown over the last 15 years. Note that when The Fed wants to grow its balance sheet, it literally just enters keystrokes on a computer to add zeros to its own accounts. Neat trick! 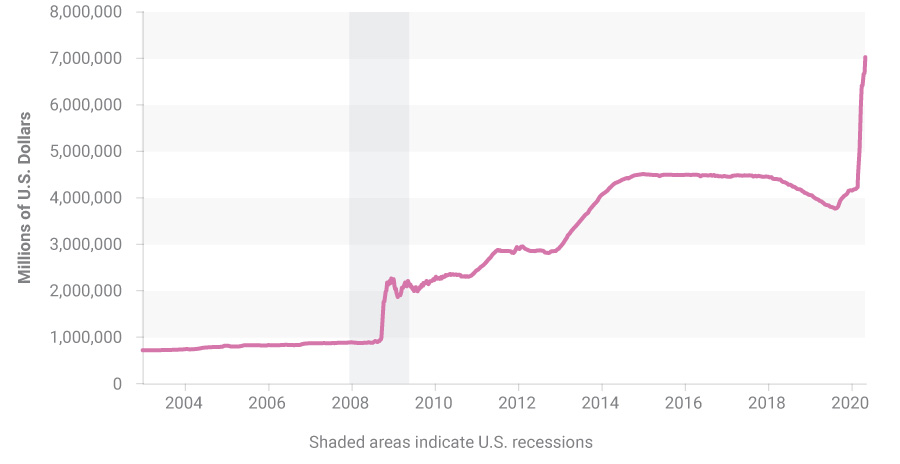 Source: Board of Governors of the Federal Reserve System (US).

Note that the grey shaded area in the chart represents the Global Financial Crisis (GFC), which was when the original sharp jump higher in the balance sheet took place. This was as the result of The Fed printing money to stave off the worst of the housing market collapse which precipitated that crisis, as well as support broader financial markets.

Despite the fact the GFC ‘ended’ roughly 10 years ago, there has been no end to the money printing. Instead it has just got more extreme. Indeed, whilst it took The Fed almost 8 years to add USD $3 trillion to their balance sheet in the aftermath of the GFC, this time they’ve done it in around 8 months.

All of this money has to go somewhere. Undoubtedly, some of it will find its way into hard tangible assets like pink diamonds, as it has for the last decade or so, with the price of pink diamonds rising by more than any other mainstream asset class over this time frame.

Why higher inflation is a bad idea

Despite mainstream economists, financial policy makers and market commentators singing the benefits of higher inflation and stating that it’s the way out our current economic malaise, we are not so sure.

There is one key reason why we think higher inflation is a bad idea. In simple terms, it makes us poorer. As inflation rises, every dollar that we earn loses purchasing power, meaning it buys less goods and services.

Bear in mind that even before this crisis began, many Australians were already facing financial difficulty, with an ME bank survey in 2019 finding that:

With the onset of COVID-19, we now face the largest economic shock in a century, which will bring with it an unprecedented employment crisis. Sadly, people are going to lose their jobs en-masse.

How exactly will it help these people, or the roughly 50% of Australian’s who already couldn’t save on a regular basis if the price of food goes up, or if their electricity bill rises?

Moving on from that and it’s also worth assessing the impact of inflation on our portfolios. Every percentage point increase in inflation means that the value of our portfolios declines in real terms.

And whilst mainstream commentators point out that higher inflation eats away at the real value of debts (a good thing given how highly geared many households are), the reality is that on balance, households have a lot more in assets than they do in debts.

That much is made clear in the excellent chart below, which comes from the RBA, and highlights net wealth, dwelling (housing) wealth, financial asset wealth and liabilities, with all shown as a percentage of GDP.

As you can see, household liabilities in this country are almost 200% of GDP. Household assets are closer to 800% of GDP. Said another way, for every $1 of real debt we inflate away with higher inflation, we destroy $4 of real wealth.

Anyone who understands these numbers will understand how absurd it is to think higher inflation will be good news for the economy, or for the average citizen.

How to protect yourself

Given the risks of higher inflation, the question for investors is how do I best protect myself, and even thrive in such an environment.

Ultimately, it will come down to the assets you own in your portfolio. Money in the bank, which is already paying record lows given the RBA has cut the cash rate to just 0.25%, is going to be dead money in the years ahead.

You can pretty much say the same for bonds, given current market pricing suggests these assets will earn less than the rate of inflation for the next thirty years.

Shares might be OK, but they are at the tail end of a decade long bull market and are facing the biggest earnings shock in 100 years. Property is likewise exposed, especially in Australia given record household debt levels, an oversupply in certain parts of the market, and the now almost complete absence of foreign investors.

Astute investors are well aware they need to move into discrete and tangible assets, as these have historically offered the best inflation protection. The laws of supply and demand always rule the market in the end, which is why paper assets (created digitally with a keystroke) always lose out to real assets (the supply of which is governed by mother nature) in the end.

Pink diamonds are not the only tangible asset investors can turn too. But they are the most beautiful, the most discrete, and have been the highest performing over the last 15 years.

They are also the only ones facing a near complete shutdown in primary supply, once the Argyle Diamond Mine shuts at the end of the year. There is rare, and then there is pink diamond rare.

If you not only want to protect yourself, but also profit from higher inflation, then they are an asset worth looking at.