This article originally appeared on ABC News and can be accessed here.

They say diamonds are forever, but time is finally up for Australia’s only operational diamond mine in Western Australia’s remote Kimberley region.

Since opening its doors almost 40 years ago, Rio Tinto’s Argyle diamond mine has produced 865 million carats of rough diamonds and is one of the few known sources of pink diamonds in the world.

But today the very last of these precious gems will be mined from the site, located within the ancient Matsu Ranges more than 3000 kilometres north of Perth.

Argyle general manager Andrew Wilson said employees and traditional owners would come together in a ceremony this morning to mark the historic milestone.

“Many people have given this business a lot of their years and have loved that journey,” he said.

“But getting to the end, something we’ve focussed on is making sure we finish really well and closing with pride.

“We’ve probably still got around the 300 people on site … that will slowly drop off over the next two to three months, and we have lots of ways to support them through that.”

The end of an era

Mr Wilson said the final day of production was the end of an era for the industry and an emotional day for the thousands of people who had contributed to the mine’s success over the years.

“I think there’s a real romantic feeling around this business,” he said.

“It’s well represented across Australia in people’s hearts because they’ve bought an Argyle diamond, but it’s also significant in the mining industry.”

Only a few short years after opening, the Argyle mine impact was felt across the world, doubling diamond production globally.

The mine was also Australia’s first large-scale diamond producer, pioneering the fly–in fly–out model, and seen as a great opportunity for a workforce drawn from across the nation. 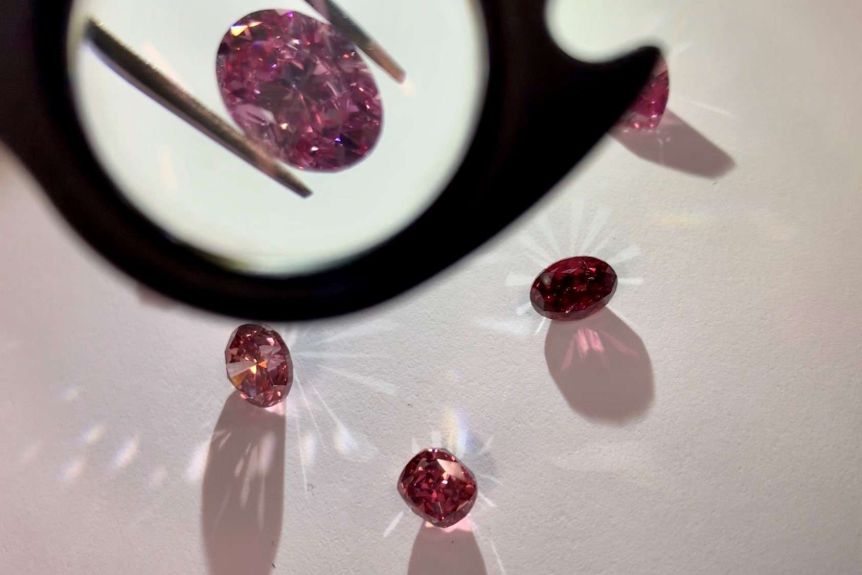 No mine in the world produces pinks as vivid as the Argyle diamond mine.(ABC Kimberley: Courtney Fowler)

At its peak in 1994, Argyle produced 42.8 million carats of rough diamonds, later transitioning from open pit mining to underground in 2013.

At this time Rio Tinto created the State’s first block cave mine, which saw Argyle extend the life of the mine for a further seven years until today.

But it wasn’t an easy journey to build the multi-billion-dollar enterprise that exists today, according to La Trobe University adjunct professor Stuart Kells.

The Argyle diamond mine was born from humble origins, with the first diamonds discovered by a group of geologists in the 1970’s, before Rio Tinto began mining the deposit in 1983.

Dr Kells, who is penning a book called Argyle: The Impossible Story of Australian Diamonds, said the mine faced many challenges in its formative years. 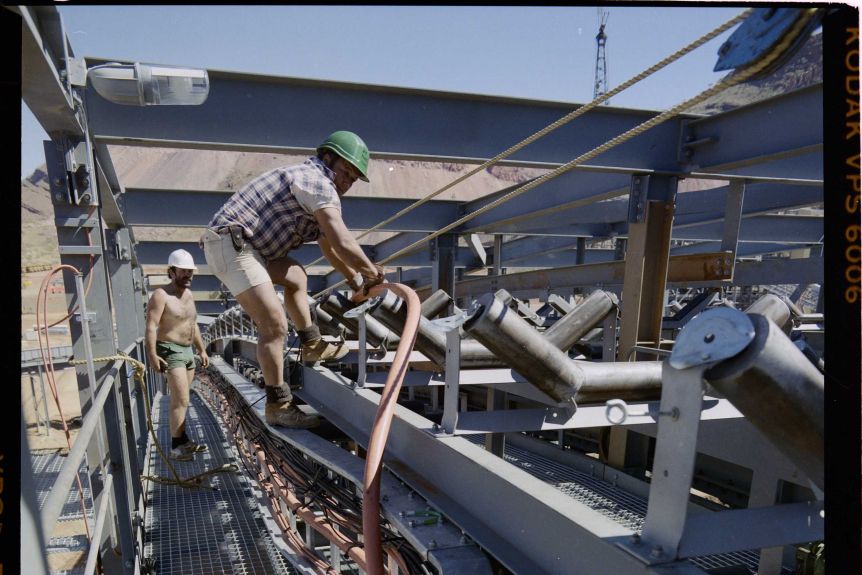 Workers at the Argyle Diamond Mine during it’s early years of operation.(Supplied: State Library Of WA)

“The business and the mine became a multi-billion-dollar enterprise but they began with $100,000 and five partners from around the world, so it was a shoestring enterprise,” he said

“They had to deal with diamond thieves and all sorts of other problems — it was one problem after another.”

Dr Kells said in the early days of Argyle, new x-ray technology and exploration methods were created to make the search for diamonds more efficient across the rugged, unforgiving, remote Kimberley landscape.

“There were new methods including using geologists in helicopters to get mineral samples, searching for tiny mineral clues in an area that was really only just opening up,” he said.

“And the scale of the diamond deposit was so large they had to come up with new technology to handle this incredible throughput and incredible output of diamonds.”

Selling pinks to the world

But from the modest startup budget of only $100,000, the Argyle mine has become the largest producer of coloured diamonds in the world, producing 90 per cent of the global supply of vivid pink gems.

“In my very early days, I was fortunate enough to be helping with the promotion of the pink diamonds internationally, and that meant going to the main diamond centres of the world like Geneva, Antwerp and New York,” he said.

“I remember being in an auction saleroom in New York, and there was just this bidding frenzy for what were these very rare and special pink diamonds.

“I think within a very short period of time they discovered they had something that was very exotic and very sought after as well.” 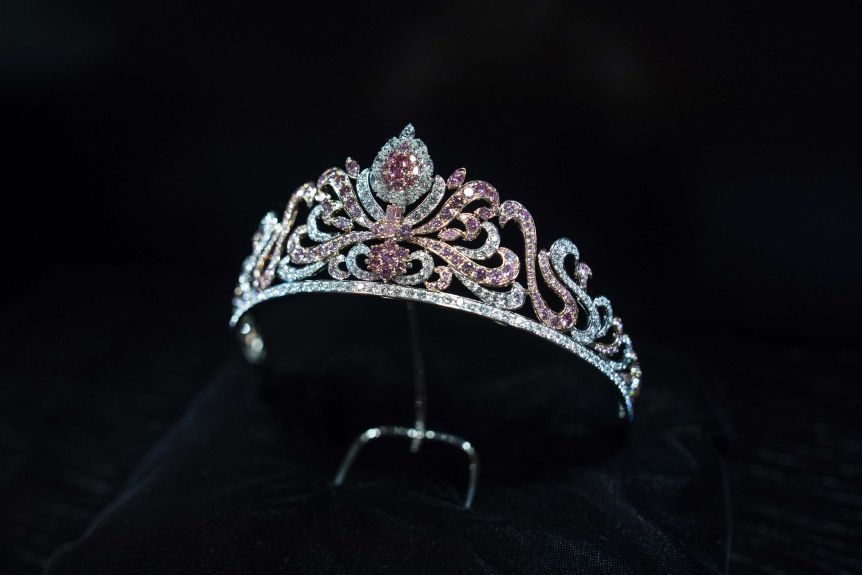 The most rare and valuable of the mine’s coloured diamond production are offered each year in the Argyle Pink Diamond Tender, considered to be the most exclusive diamond sale in the world.

The 50 to 60 stones selected for the annual tender are so rare, they equate to less than one tenth of a per cent of the year’s production.

In practical terms, the total number of top quality pink diamonds could be held in the palm of your hand.

Mr Fardon said he had the privilege of handling many of these incredibly rare gems, after a long association with the Tender spanning more than three decades.

“I have participated either in terms of coordinating and running the Tender or in more recent years sitting on the other side of the table and considering what stones we might bid for,” he said.

“Certainly, in terms of pinks you’ve seen them continue to appreciate in value, the rarest of them valued up to the millions of dollars per carat.”

Closing an iconic mine

Over the past 20 years, the value of Argyle Pink Diamonds sold at the tender have appreciated 500 per cent, outperforming all major equity markets.

Mr Fardon said these results reflected the supply of these extremely rare diamonds becoming even more scarce and more valuable.

When the iconic mine closes its doors, it has been estimated global diamond production will drop by 10 per cent.

However, Mr Fardon remained optimistic about the future of the pink diamond industry.

“The reality is that people who are in the diamond business have been purchasing for stock in some cases nearly the whole time of the mine’s life,” he said.

“By the time that flows into the world market, I’m quite confident for the foreseeable futures there is going to be a supply, but it’s not going to be forever.” Argyle general manager Mr Wilson said Argyle stockpiles would continue to be processed over the next six months before plant equipment was dismantled and the five-year closure and rehabilitation process began.

He said Rio Tinto would continue to have a presence over the next decade monitoring the site, working with traditional owners who had already started to collect and plant native seed for land restoration.

“Our ultimate aim once the closure is completed, is that we support the traditional custodians of the land and we transfer it over to them,” Mr Wilson said.

“They may look at some tourism activities, maybe even cultural use or some kind of small-scale agriculture as well.” What does the future hold?

A well known Indigenous tourism operator hopes the Argyle Diamond mine will continue to accommodate visitors during its shutdown period.

Since 2007, Miriwoong traditional owner and operator of Luridgii Tours Ted Hall has taken thousands of people through the mine to explain its cultural significance.

“In the Dreamtime story the women’s group built the Matsu ranges to trap the barramundi … and in the Miriwoong version it deposited two eggs in a sacred waterhole,” he said.

“The story of the Dreamtime barramundi depositing eggs and the discovery of diamonds — there’s a link.”

Mr Hall said he believed there had been a good relationship shared between traditional owner groups and the mine operator’s over the years.

In the early 2000’s, work started on building a new mining agreement between Argyle and several traditional owner groups, eventually registered in the National Native Title Tribunal in 2005.

The Indigenous Land Use Agreement provides for the transfer of the grazing lease to traditional owners at the completion of mining operations, and for the recognition of native title rights over the area.

“Personally, I would like the opportunity and freedom to continue living on the land, operating my business, and doing tours to educate both sides,” Mr Hall said.

“Fingers crossed to hanging on to 2021 for the last of the tours. What happens after that is the question.”