It’s been another interesting week in financial markets, with employment data out of the United States suggesting the economic recovery most forecasters expect to see in 2021 may not be as strong as hoped for.

Meanwhile, cost pressures continue to build, with the oil price rising back above USD $60 a barrel for the first time in a year, whilst expectations of future inflation rates continue to increase.

These developments are positive for the pink diamond story, with this market update reviewing in detail a decision made by the Reserve Bank of Australia (RBA) last week which helps explain why this will be the decade of diamonds.

In early February 2020, the RBA had their first board meeting of the year. Following on from this meeting, as is custom, the RBA released a statement explaining their latest views on the global and domestic economy, looking at trends in employment, GDP growth and the like.

By and large, the RBA painted a relatively positive outlook, noting that “In Australia, the economic recovery is well under way and has been stronger than was earlier expected. There has been strong growth in employment and a welcome decline in the unemployment rate to 6.6 per cent. Retail spending has been strong and many of the households and businesses that had deferred loan repayments have now recommenced repayments.”

So far so good one might be tempted to think.

However, whilst the above represents the words the RBA chooses when it comes to describing the economic outlook, we are more interested in their actions.

And the key action the RBA took at the meeting earlier this month was the decision to purchase AUD $100 billion worth of bonds issued by either the Federal Government or states and territories, with the purchases to be staggered such that they occur at a pace of roughly AUD $5 billion per week.

We are somewhat confused by the apparent discrepancy here. If the economic recovery is going better than expected, why does the RBA need to print another AUD $100 billion? Why do financial markets or the economy need the extra liquidity hit?

The answer no doubt in part lies in the strength of the Australian dollar, which has risen by almost 40% in the last year, with a recent article in Livewire Markets noting that “all central banks are doing everything they can to debase their currencies.”

Interestingly enough, there are already economic forecasters who say this second round of AUD $100 billion in monetary stimulus will not be enough, with many now expecting the RBA will announce a third iteration of the programme at some point later this year. 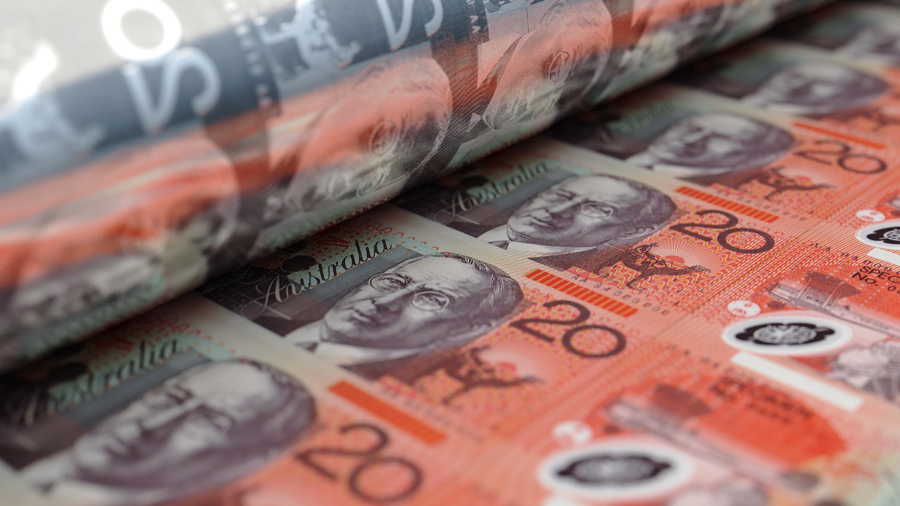 Many economic forecasters now expect the RBA will announce a third round of money printing at some point later this year.

This line of thinking is hard to dismiss given senior RBA officials are openly stating that at present, they have no intention of taking their foot off the pedal when it comes to stimulus. As evidence of this, consider the below comment from RBA Deputy Governor Guy Debelle who recently noted that; “I think in the situation we’re in at the moment, I would certainly think the right decision is to err on too much support rather than too little support”. The RBA is learning from the lessons of the post-GFC period when it arguably under-clubbed its stimulus.

In time, we have little doubt these actions will succeed in “debasing the currency”, which is a somewhat polite way of saying ruin the purchasing power of your savings.

This phenomenon is one of the key reasons we remain so bullish on pink diamonds, and why we think prices will head much higher between now and 2030.

Every day, more and more astute investors are coming to the realisation that the fact they are earning nothing in real terms with money in bank or term deposits is not an aberration. It is the new normal, and it’s only going to get worse in the decade to come.

Given this reality, it is only natural to position yourself in hard assets to protect and grow wealth.

As regular readers of our market updates know, the extremely limited supply of pink diamonds is one of the factors that has made them such a highly favoured investment, and why prices have risen by more than 10% per annum for the past fifteen years.

That supply was squeezed further still in 2020, with the Argyle Diamond Mine seeing total diamond production fall by more than 15% in its last year of operations, with the mine closing for good in November 2020.

It’s not just an Argyle story though, with coloured diamond output also being impacted in the few other parts of the world where they are found. In Canada for example, Rio Tinto (which is also a shareholder in the Diavik Diamond Mine) saw total diamond production fall by 7%.

The extreme monetary environment investors need to navigate in the decade ahead, coupled with the squeezed supply profile of pink diamonds makes them one of the most compelling investment opportunities available today.