A key reason to invest in pink diamonds

It’s been another interesting week in financial markets, with a short-term spike in cryptocurrencies, a fall in precious metal prices, and a small decline in the value of the Australian dollar.

Whilst we regularly report on the short-term gyrations in markets, and think they are important to follow, it is even more important to contextualise the day to day moves within a bigger picture framework.

For ultimately, it’s the bigger picture that should determine how we invest, which asset classes to put our money into, and which ones to avoid.

And in the last week, one of the key long-term trends that we think will support pink diamonds, the existence of higher inflation, came to the fore.

We explore in detail below.

We write regularly about the risk of inflation in our updates at Australian Diamond Portfolio, for two main reasons.

Firstly, it poses a genuine threat to the investment portfolio of all Australians, whilst it’s also one of the major catalysts behind the rising demand we are seeing from pink diamonds from our rapidly expanding customer base.

And whilst we often talk about how we expect inflation to rise, and be a major problem in the decade ahead, this week we wanted to acknowledge that in many ways, higher inflation, and the problems it causes, are here already.

This was made perfectly clear last week, when the United States released their latest annual inflation data, which showed that economy wide, prices had risen a whopping 5% over the past year.

This was the highest rate of annualised inflation since 2008, which was around the time the Global Financial Crisis (GFC) hit, with the below headline from MarketWatch summing things up nicely.

Given this is occurring in the midst of a still as yet unresolved pandemic, the problem of higher inflation should be clear to all (except central bankers it seems), given the added pressure its placing on household budgets.

Whilst we may not see inflation rates stay at 5% each and every year going forward, there seems little doubt the era of lower inflation, which has been in place since the late 1980s and lasted for roughly 30 years, is likely over now.

Instead, we are more likely to witness a re-run of what occurred between the 1950s and the beginning of the 1980s, when inflation rates headed much higher, at one point topping out near 15% per annum, as you can see in the chart below. The economic and political implications of this evolving trend will be profound, while from an investment point of view, no one interested in protecting, let alone building wealth in the years to come can afford to ignore these developments.

As we’ve long indicated, cash is trash, and will likely remain so for decades to come.

The time to look at alternative stores of wealth, including pink diamonds, is now.

Australia is not immune

Far from being constrained to the United States, the scourge of higher rates of inflation is being felt across the developed world, including here in Australia.

Whilst the next official set of inflation results won’t be seen until late next month, markets are forward looking, and experts suggest that in the 12 months to June 2021, the costs of goods and services in Australia will likely have increased by almost 4.5%

What’s worse is that inflation is not evenly split across the range of goods and services that as a society we either need or choose to consume. Indeed, over the past decade and a half, the price of the “must haves” in life has risen by 44%, versus just 18% for the “want to haves”.

That much is made clear in the below chart, which comes from the Australian Bureau of Statistics (ABS) themselves, showing a 44% increase in essential items (rent, utilities, petrol, electricity, food etc) over the past 15 years, versus just 18% for non-essentials (going out, fast food, fashion items etc). 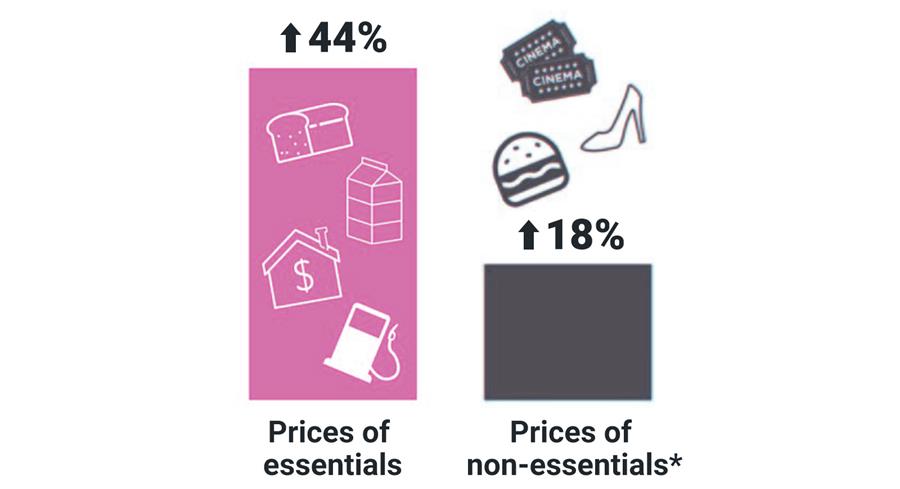 Given this breakdown, it’s no wonder an increasing number of Australians are finding it harder to get by.

From an investment point of view, the already problematic levels of inflation help make the investment case for pink diamonds a slam dunk.

Why keep your money in the bank earning close to zero, when overall inflation is rising, and is already high for essential items, when you could instead invest in a genuinely scarce asset that is experiencing rising demand and has a track record of increasing by more than 10% per annum.